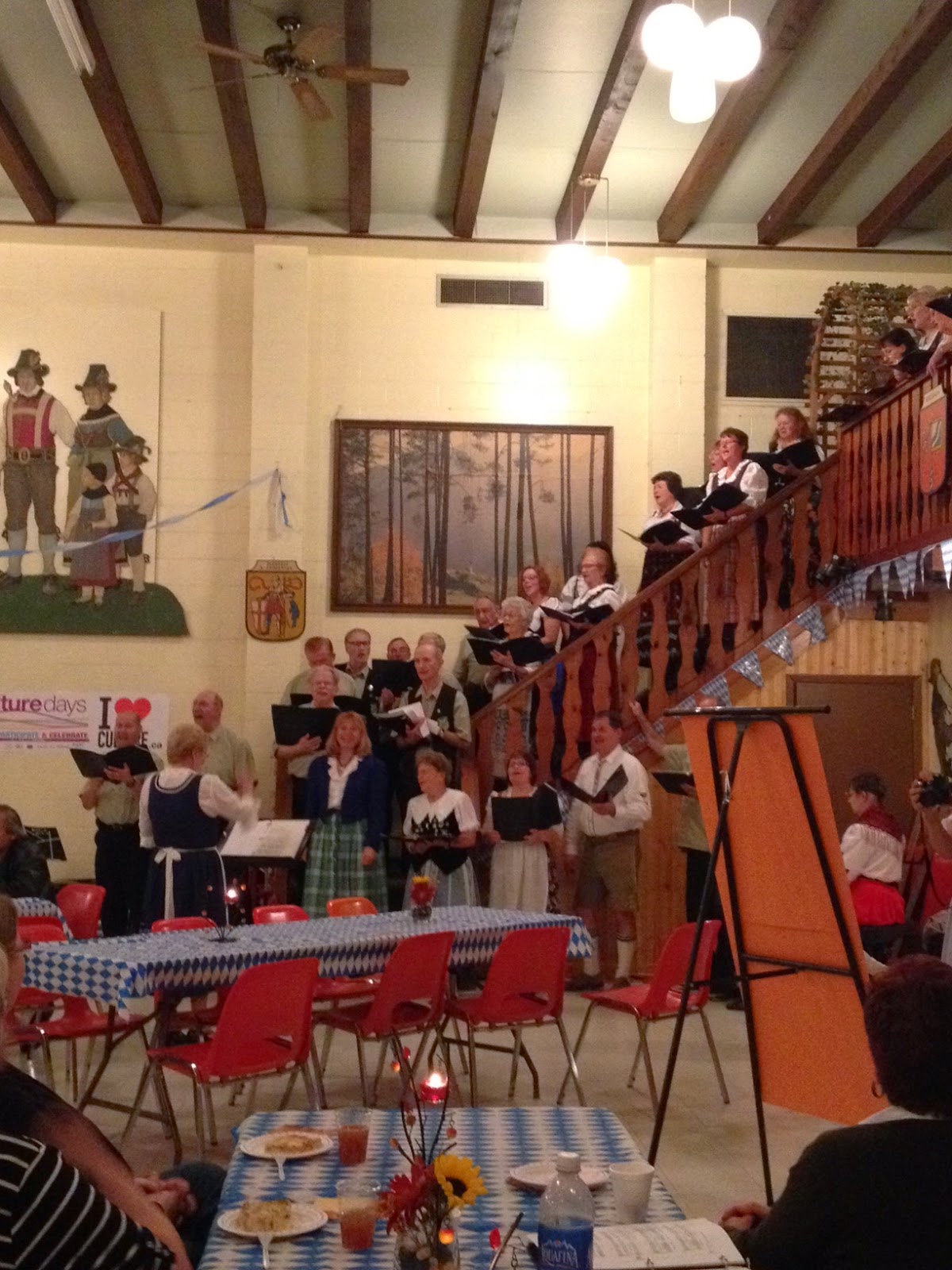 One of our partner organizations, the Saskatchewan German Council, is dedicated to promoting the heritage, culture and interests of Saskatchewan people of German-speaking backgrounds. Its mission is to “to preserve, promote and further German language, traditions and culture for all people of Saskatchewan by engaging people of all ages to become active and involved partners in a vibrant multicultural community in Saskatchewan.”

There are a number of upcoming events at the Regina German Club and German Cultural Centre in Saskatoon that promote German culture. Want to attend a Spargelfest or listen to a German choir? You can attend a workshop on buying a house, go to an Easter Sunday Brunch or take German-Canadian cooking classes.

While traveling Saskatchewan during Culture Days 2013, we stopped at the Harvest Wine Festival at the Regina German Club to eat Zwiebelkuchen (onion cake) and enjoy a choir singing traditional German songs (see photo to the right).

Dispelling Myths about the Niqab through Story

Canada is currently having a national debate about the niqab, the face veil worn by a small number of Muslim women, after a woman did not remove hers during a citizenship ceremony. She then asked a federal court to make a ruling about the legality of the Conservative government’s policy that stipulates women must remove the niqab during the oath-swearing portion of a citizenship ceremony.

A passionate debate on the matter has emerged, with some people saying the niqab is rooted in a sexist culture and that it is a practice oppressive to women. While teaching a course on Women’s & Gender Studies at the University of Regina, a student from Syria told me that her decision to wear the hijab, a veil that covers the head and chest, was not forced on her by sexism; rather, it was a personal, spiritual decision. 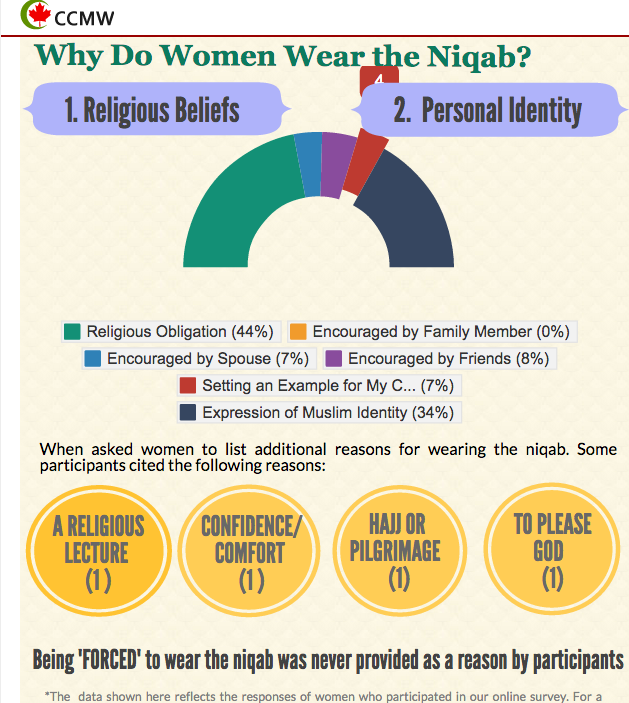 Stories are important for bringing a new understanding and awareness. They can help dispel myths, break stereotypes and correct false assumptions. Stories are also a way for people to express their truths. Rather than talk about Muslim women who wear the niqab, it would be useful to make space for niqab-wearing women to be able to share their stories and for everyone else to listen.

In this study, Women in Niqab Speak: A Study of the Niqab in Canada, 81 women were interviewed, and “being forced” to wear the niqab was never provided as a reason for wearing it.

In this article, Zunera Ishaq, the woman at the centre of the niqab debate, writes, “It’s precisely because I won’t listen to how other people want me to live my life that I wear a niqab. Some of my own family members have asked me to remove it. I have told them that I prefer to think for myself.”

She also shares this: “Aside from the religious aspect, I like how it makes me feel: like people have to look beyond what I look like to get to know me. That I don’t have to worry about my physical appearance and can concentrate on my inner self. That it empowers me in this regard.”

In this powerful interview that aired on The Current, three women who wear, or have worn, the niqab share their reasons for choosing to wear it, as well as the impact that choice has had on their lives and their loved ones.

As we collected stories from Saskatchewan immigrants, newcomers and Indigenous communities for the Stories of Integration Project, a noticeable theme emerged. People expressed the importance of being able to retain their unique cultural customs, values and practices. As one woman, Xiaofeng from China, said, “I think multiculturalism is great because it's like a rainbow. You see a rainbow, and it's colourful.”

Another woman, Ingri, immigrated to Weyburn from Chile, and told us a story about going shopping with a friend from El Salvador. The Salvadorian woman would wear her apron instead of a purse, said Ingri, who appreciated that her friend could continue practicing her cultural customs in Saskatchewan, instead of being forced to assimilate into Canadian culture.

One of our PSAs, “From Many Peoples Strength,” reflects the idea that everyone has a story to tell. Sharing our stories and respecting one another’s culture helps build a stronger community.

Oskar's Deli and Sausage Haus had a special place in the hearts and bellies of the people who belonged to the German community in Regina. When the deli closed last year after 39 years of business, its customers needed to find a new place to buy bratwurst.

Last week, the CBC told a touching story of how the Ukrainian Co-op in Regina stepped in to recreate some of Oskar's products for the German community. The Ukrainian Co-op, managed by Karen Rogers, even ended up with Oskar's secret sausage recipe so that its former customers could continue to buy and enjoy it. Read the CBC story here.

What a beautiful story that exemplifies the coming together of two cultures. It's a story of collaboration, cooperation and respect, reflecting some of the themes from the Stories of Integration PSAs. As one woman said in the PSA, Culture is a Two-Way Street, the relationship between two cultures is "more of a give and take relationship and eventually it develops into friendship."

In 1910, at an international conference of working women in Copenhagen, Clara Zetkin, a member of the Social Democratic Party in Germany, proposed the idea of an International Women’s Day—a day when women would put forward demands for equality. The delegates at the women’s conference—representing 17 countries—unanimously voted in favour of Zetkin’s proposal. In 1911, International Women's Day was recognized for the first time in Austria, Denmark, Germany and Switzerland. Since then, countries worldwide continue to celebrate International Women’s Day on March 8, recognizing women’s achievements while calling for greater equality.

There are numerous events happening across Saskatchewan for International Women’s Day this year. One in particular focuses on storytelling. Women Building Bridges for Change Through Art and Story is a collaborative project of the Multicultural Council of Saskatchewan, Regina Immigrant Women Centre, the MacKenzie Art Gallery, Intercultural Grandmothers Uniting, Saskatchewan Human Rights Commission, Amnesty International and other community groups. The event, which will take place on Sunday, March 8 at the MacKenzie Art Gallery from 1:00-3:15 p.m., includes opportunities for women from a variety of cultural backgrounds to connect through story and art.

Attendees are invited to interact with the MovingForward, Never Forgetting exhibition, which features work exploring the intergenerational impact of colonization and ways of moving forward through cross-cultural friendship, familial sharing and cultural continuance.

What’s particularly unique about this exhibition is the works are accompanied by Story Keepers—living speakers who will assist visitors in learning about the stories behind the art works and collect stories from visitors.

At 3:30 p.m., participants will then be invited to board buses and travel to the Albert Street Bridge to take part in an international movement, Join Me On The Bridge. There, participants will connect with one another with red coloured scarves “to show freedom and empowerment.”

Do you have a story of integration to share about a female relative? Are you a woman with your own story to share? Tell it to us using the hashtag: #WeAreSK.
Posted by We Are SK at 13:13 9 comments: